a home cook with notions & an appetite 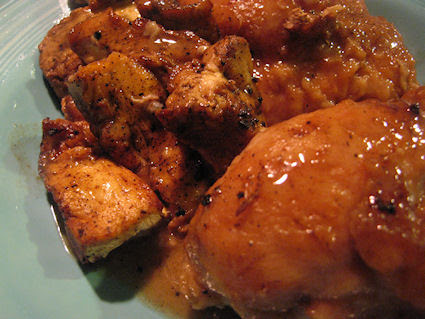 Starting last month, the puffballs began making an appearance at the Farmer’s Market.  These giant mushrooms are about the size and shape of dodgeballs.  That is, the dodgeballs of long-ago gradeschool where one was permitted, nay, expected to bean a fellow grade-schooler in the head.  I’m sure nowadays the kids are only permitted to hurl mildly-inconsequential near-niceties as a “dodge ball of almost-niceness” is lightly handed back and forth so no one’s super-special feelings or bones are hurt.

Where was I?  Ah, yes – the puffball mushroom.  It’s about this size on the can of Diet Coke scale:

I’m immediately taken by this and decide to purchase it fully convinced that between the information sheet given to me that includes a Puffball Parmesan appetizer recipe from the farmer and the presence of the internet, I can find something to do with this mushroom.  The Mycological Society of San Francisco doesn’t let me down and reprints a pretty straightforward recipe for Chicken Baked with Puffballs from their cookbook written by Louise Freedman.

Here are the ingredients I used: 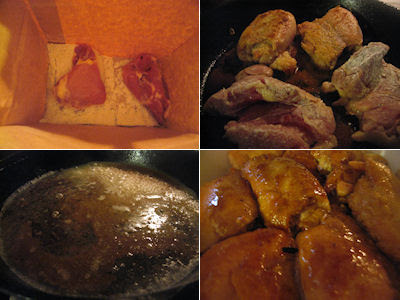 I’ve mixed the tarragon, salt and pepper with the flour into a paper sack so I can shake two of the chicken thighs at a time in the sack to evenly coat them in the flour mixture.  From here, it was the usual quick brown in the olive oil for the chicken to sear the coating and keep the chicken from drying out in the oven.  Did I mention that I’d preheated the oven to 350 degrees?  I did.  Once the chicken was browned, I deglazed the pan with white wine and let it cook down for a couple of minutes (nothing severe), adding the crushed garlic for the last 30 seconds.  I’d placed the chicken in a baking dish and poured this quick pan sauce over the thighs.   Since the original recipe called for chicken pieces with bones, I cut the original 20 minute cooking time in this step down to 15 minutes after putting a cover on the dish.

In the meantime, it was time to prep the puffball: 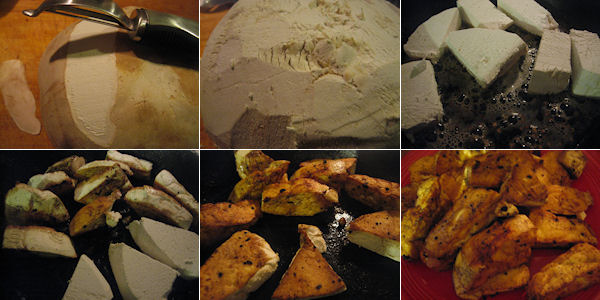 The outer skin of a puffball can be intestinally irritating for some individuals, so peeling the mushroom is step 1.  It’s pretty fast work, even if it doesn’t look super-clean in the end.  This is also the moment where you want to make sure the puffball is white.  If it’s turning green or yellow, it’s turned and no one wants to eat a mushroom that’s turned.  The mushroom resembles tofu in a way and can be pan-fried or grilled in many of the same methods.  After slicing up the mushroom, I quickly browned the mushroom in butter heated in the same pan I’d cooked the chicken (I didn’t wipe out the pan for flavor).  The browning is partly the butter but also part of the way the mushroom cooks. 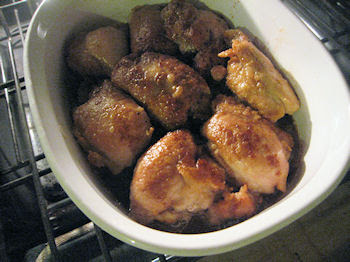 The chicken had been coming along nicely in the oven, but wasn’t quite there.  With the mushroom browned, I took the chicken out of the oven temporarily and added the browned mushroom to the top of the chicken and baked for 15 minutes longer.  After taking it out of the oven, the sauce had baked into a lovely, thick sauce and the whole thing had become this earthy, woodsy dish thanks to the puffball.

This entry was posted on October 30, 2011 by foodie mcfooderson in farmer's market and tagged baking, casserole, chicken, mushroom, puffball.